I usually don't make ice cream as we don't have a machine and I can't be bothered taking a bowl out of the freezer to mix the contents every so often.  I inevitably forget and it turns into crystallised lumps due to my neglect.

I decided to try a different method, one that is totally low faff, and only needs mixing once at the beginning of the process.  I altered a cheesecake recipe that I'd developed and tweaked it to be freezable without going rock solid.  After some experimentation, this recipe was born.  This a great base for using up any berry gluts you might have and the ice cream was enthusiastically devoured by my family, even bubs had some.

You could use stone fruit instead of berries, the recipe is a great base for experimentation with flavours.  I discovered condensed milk now comes in a squirty bottle, much easier than having a partly used opened tin languishing about. 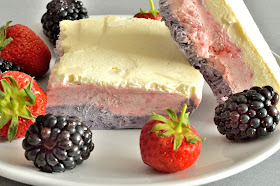 Beat the double cream and condensed milk together until thick and holding it's shape.  Divide the mixture into thirds.  Blitz the berries and add each to a third of the mixture.  Pour each flavour into a lined 23cm cake tin, taking care not to mix the flavours unless you want a marbled look, and gently smooth the top.

You could freeze each layer before adding another layer but who has time for that?!  This is meant to be a low faff recipe after all.  Put in the freezer overnight, or for at least 6 hours, then slice and devour. 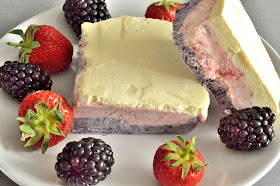